Before the Emirates camp .. Ahli ends the travel procedures .. Maran concluding and regularity of Maaloul and Geraldo 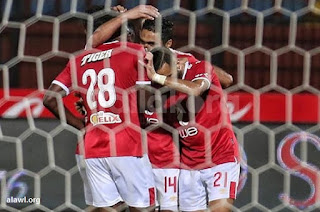 The administrative team of the first football team in Al-Ahli Club has finished all the procedures related to the team's travel to the UAE.

The administrative body has obtained visas and air tickets, and set a Thursday morning for the mission travel, in preparation for the start of the training camp set by René Feiler, the team's coach.

It is scheduled to be preceded by Sayed Abdul Hafeez, director of football, and Samir Adly, managing director, the team where the duo head to the UAE this evening to check on all the arrangements for the camp before the arrival

The team, in their final training in Cairo this evening at the Touch Stadium, before heading to the UAE for the first period of preparation during the suspension of the Premier League.

Ali Maaloul and Angolan Geraldo are expected to take part in the training after the end of their rest period, in preparation for their travel with the mission tomorrow.

Feiler aims to make the most of the break during the league because of the international agenda, which will see the first national team to participate in the meetings of Kenya and the Comoros scheduled for next month, in the qualifiers for the African Nations 2021 in Cameroon, and the Olympic team in the African Championship in Egypt. And qualifying for the 2020 Tokyo Olympics.

On the other hand, Mahmoud Metwally, the team player began to participate in the group training gradually, after improving his condition in the recent period according to the results of his rays to identify the healing rate suffered in the Egyptian Super match against Zamalek.

The rays revealed a significant improvement in the condition of Metwally, and healing of the posterior muscle rupture by a large extent, and began the team doctor Khaled Mahmoud in coordination with Thomas Pinkel load chart, pushing the player in the part of physical training with the team, in preparation for his return to participate fully in the group exercise.

Metwali and Al Ahli are due to travel to the UAE to set up a training camp during the Premier League break due to the international agenda.