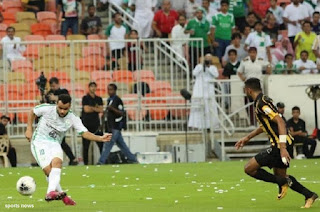 Saudi Arabia's Al-Ahli continued to show its superiority over Al-Ittihad and beat it 2-1 in the Jeddah derby match between the two teams on Thursday at the stadium "Al-Jawhara Al-Radha" stadium in the ninth round of the Prince Mohammed Bin Salman Cup of Professional Football (Saudi Professional League).

In the Jeddah derby, Abdul Fattah Asiri opened the scoring for Al Ahli in the 13th minute and Omar Al Soma added the second goal for the team in the 37th minute before Al Ittihad responded with a goal by Ziad Al Sahafi in the 71st minute.

The second half of the game saw Al Ittihad return to the game through a number of attempts, but most of them crashed on the rock of the Ahlani defense.

Al Ahli have 17 points to jump to second place, while Al Ittihad have nine points in 12th place.

Ahli is technically led by Christian Gross, who has been in charge of the team for the past few days.