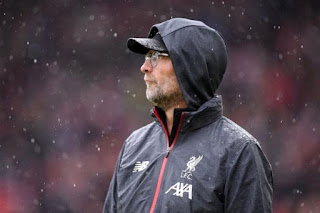 Liverpool manager Juergen Klopp has threatened to pull out of the Carabao Cup despite qualifying for the quarter-finals.

Liverpool won a dramatic victory over Arsenal on Wednesday evening, after the end of the original time of the game (5-5) and victory on penalties (5-4).

The German coach confirmed that he faces a problem in the quarter-finals of the Cup "Carabao" because of the coincidence with Liverpool's participation in the Club World Cup.

Liverpool are taking part in the Club World Cup in Qatar as the Champions League champions, starting from the semi-finals on December 18.

Klopp said after the game: "If they can not find the right time for us to play that game, and I do not mean to play in Christmas at three o'clock in the morning, but if not so we will not be able to play."

He added: "We hope that they will now begin to find a solution, I think that is just, this problem is clear now, we will not be victims of that problem."

Klopp concluded: "We played that game and we wanted to win and we achieved that, if they can not find the right time for us, we will not be able to play in the next round and our opponent will qualify."