Neville opens fire on Chaka: impetuous and his interventions are wrong and inexperienced 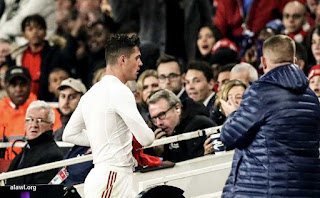 Chaka clashed verbally with Arsenal fans after boos the moment he came off the pitch, after artillery overcame the victory over Crystal Palace, only to draw 2-2.

Neville opened fire on the Swiss, saying: "I did not see a player learns little in contrast to his experience like Chaka.

"He doesn't seem to be in line with the rest of his team-mates," he told Sky. "So what happened on Sunday doesn't surprise me because his style is full of mistakes."

"He's definitely a committed player and he gives everything he has, there's no question about it, but he's the least experienced player among those who have it. He's reckless and I don't know why he didn't try to stop it."

"I have no problem with the idea of tension with the fans. I don't say it is healthy but it is happening in the world of football, but it is difficult for Chaka to continue to wear the Arsenal captaincy."

"I don't think the relationship will fix with the public quickly," he said.

Gunners coach Unai Emery admitted his captain needed to apologize to the fans, but he also tried to find some support, saying Chaka was devastating and sad.

"He knows he has made a mistake, he feels so deep in himself, but naturally as a human being every player needs the support of his fans."

"I talked to him a lot, he needs to learn that when you make a good match, the fans will applaud you, but if you have a difficult moment you have to be strong with criticism and be able to play under pressure," he said.

What about the badge?

This was a question for the former PSG coach, and his answer was not conclusive: "It's not the time to talk about it. At the moment I don't want to think about it."

"I explained my decision before choosing the badge. He has values ​​and respect in the dressing rooms as well as experience."

"Chaka is the captain of the Swiss national team and has the qualities of leadership. I chose this decision based on the respect of the players. He made a mistake on Sunday and there was no proper reaction from the captain," said the former Sevilla coach.

"First of all, we need to recover as a human being before it as a player. Then we will look at how we evolved and our way of working with him and everyone."

Arsenal are fifth with 16 points, while Crystal Palace are 15 points behind the Gunners.