Shahat to evade the Naqaz: did not expect .. And did with Abdullah Juma 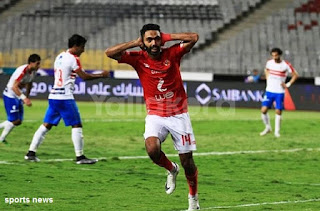 Al-Ahly player Hussein Al-Shahat talked about the famous dodgy experienced by Tunisian international Hamdi Al-Naqaz in the summit match against Zamalek in the Egyptian Super Cup.

In statements to Al-Ahli TV, Shahat recounted the goal story: "I received the pass and turned to the debate.

Al-Shahat dribbled Zamalek 's right - footed defender by passing the ball over his head and then received it into the penalty area before firing a shot from the goalkeeper.

Shahat added: "The defender often plays on expectation, but the Nakaz did not expect to play the ball this way, I think he thought I would dodge on the ground directly from him."

The Ahli wing: "I wish to hit the ball strongly in the far corner, but the presence of Mahmoud Alaa directly in front of me made me change the decision, and thank God that the game ended with a goal in the end."

Abizaid and Hussein al-Shahat, saying: "I was hampered from the debate in the penalty area and I deserved a penalty but I did not drop the ground and preferred to shoot the ball."

"Abdallah Gomaa dribbled the same way in a previous game against Zamalek, but the ball hit his head before it passed in my direction."