Zamalek training .. The return of the Quartet .. And the continued absence of Sassi 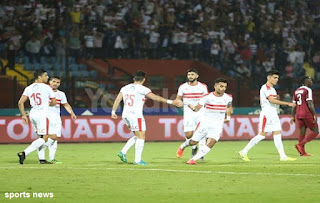 Zamalek football team resumed training on Thursday, after the holiday recently obtained by the team after passing the Senegalese team.

Zamalek were promoted to the group stage of the African Champions League after the victory against Senegal champions 1-0, where the white team was losing in the first leg result (2-1).

According to the reporter Yalla Kora club Zamalek, Mohamed Awad appeared in training after injury to the neck during the meeting of Generalsion.

On the other hand, the training witnessed the absence of Olympic players because of their presence in the camp "Pharaohs".

Quartet Mohammed Sobhi, Mohamed Abdel Salam, Imam Ashour and Mustafa Mohammed are in the Olympic camp camp in preparation for the African Nations and qualify for the Tokyo 2020 Olympics.

The coaching session saw a clash between Serbian coach Meicho with the players.

The duo of Mohamed Abdel Ghani and Omar Al Said were recovering from the injuries they were suffering from.

In another context, Micho gave rest to the player Ferjani Sassi with the participation of the Tunisian in many games, whether with the team or the Tunisian team.

Sassi is currently in Tunisia, where he is vacationing with his family. In contrast, the other Tunisian team member Hamdi Nakkaz joined in group training after the break.

It is worth mentioning that Zamalek will be organized in a closed camp in the 6th of October City after the completion of the morning exercise today.