Amer Hussein sends a message about Ahli and explains all his decisions last season .. And declares: Sorry if I made a mistake 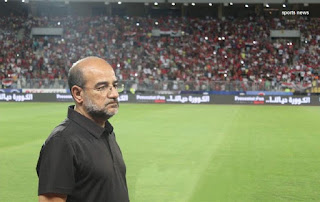 Amer Hussein, former head of the competitions committee of the Egyptian Football Association, talked about the details of his tenure last season and the crises he faced.

The Interim Administration Committee decided to appoint Hossam El Zanaty as director of the Competitions Committee for the new season.

"Since I left office, I refused to talk about it, and I regret if I made a mistake in anything before that," Amer Hussein said in televised remarks on the evening of Al-Anwar broadcasts.

`` All my decisions were based on actions that happen around me.I react and I have to look for solutions to the problems.Firstly, Ahli and Zamalek, the two biggest clubs in Egypt and Africa, do not have a stadium, they rent a stadium and security can decide to move the game. ''

He added: "Second, I was attacked in the first round of Zamalek because of the postponement of Al-Ahly matches after reaching the final of the African Champions League."

He explained: "Thirdly, in the second round happened the opposite was attacked by Al-Ahli because of the postponement of Zamalek matches after his arrival to the Confederation and help him to win the championship."

He continued: "Last season was a bit strong because the competition was very strong and not only between Ahli and Zamalek, but there are pyramids as well."

"This made things more difficult besides the African Cup of Nations which we staged suddenly and the stadiums were closed.

He concluded: "There were very difficult things Kef organized two versions of the African Champions League in one year, I told the clubs to play the league two groups to rest but said no and refused."