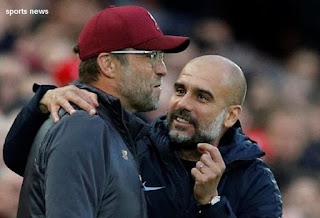 Manchester City manager Pep Guardiola has commented on Liverpool manager Juergen Klopp's comments about his desire to withdraw from the Carabao Cup.

Guardiola said in comments quoted by the newspaper "Mirror" British: "I support Klopp's comments on the pressure of games in winter, unlike other leagues."

He added: "In the Cup games I will not pay the trio Kevin de Bruyne and Ilkay Gundogan and David Silva and this thing Liverpool did at Arsenal in their last game."

He continued, "Cup games an opportunity to participate players who do not participate continuously because of the number of games too many."

Klopp made the remarks after his team reached the quarter-finals of the Carabao Cup, threatening to withdraw from the competition if the FA did not decide to amend the date of the quarter-final against Aston Villa to be held in December.

It is worth mentioning that Manchester City will face rivals Southampton in the 11th week games, and Liverpool will play the same day when he goes out to face Aston Villa.