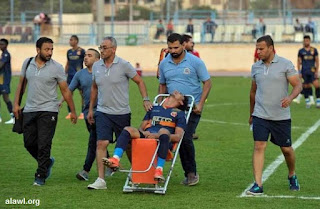 The first half of the second division Seramica Cleopatra and Al Nasr match came to an end with 45 minutes to go before Mahmoud Shukri, Ceramica goalkeeper, was injured after pulling the ball off the field.

So far, things have been going normally and the Ceramica goalkeeper fell and his team doctor, Farid Radwan, rushed to treat him.

Ceramica was ahead with two clean goals: "The referee was in a hurry to treat the goalkeeper and thought of wasting time with us, but we were gaining a bruise in his arm and I was treating him."

With the continued presence of Ceramica doctor, Farid Radwan, the feeling of the referee's feeling that they are disrupting the time of the break: "Sitting upset us and I said I could ask you to ask us to talk to the comfort of the guard really injured."

This talk, which seems simple as narrated by the doctor Ceramica Lila Koura was the reason for the expulsion of the referee of the meeting and demanded the fourth official to get him out of the stadium for good. 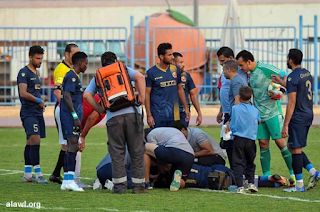 Ceramica's doctor refused to leave the pitch on the pretext that his presence is important.

Ceramica doctor Farid Radwan tried to enter the stadium floor and dressing rooms but was refused to continue to sit in the stands.

After 30 minutes of the second half, Ceramica Hussein Zaki fell, and Mohamed Shafei, rehabilitation and injury doctor, Amr Raouf and Mohamed Abdelsalam were admitted to the hospital for medical help but the player may suffocate after swallowing his tongue and Al-Nasr doctor tried to help them in his treatment.

The game stopped, but for Farid Radwan there was another match to enter the game to save the player as soon as possible: `` I skipped from the stands and came down to the pitch and with the help of the doctors we were able within 10 minutes to restore his tongue to normal before we transferred him to the ambulance. ''

Another 10 minutes passed in the ambulance, where doctors received a response from Hussein Zaki to reassure those present that he had responded to their first aid.

This is not the first time for Farid Radwan, who contributes to saving the life of a player.