Abdelhafid: We have the right to replace two players in January  and a Feiler did not complain about touch 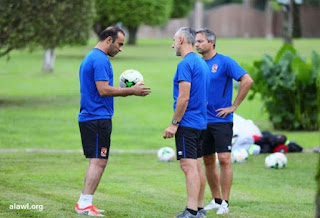 "Each club is allowed under the new registration system to replace a maximum of five players over the summer and winter transfers from the 30-man list," Abdul Hafeez said.

"This is in addition to the presence of five other players under the age of a foreign couple, I did not understand that at the beginning but we responded in the end, although this provision has become mandatory for everyone to serve a particular club."

He continued: "We had 43 players, the list of the Football Association caused us financial and technical losses, especially since we did not get enough time to market players after giving away some of them free such as Ahmed Hammoudi and Hisham Mohammed."

"There have been no reforms due to climate factors, but the condition is very good now and it may be developed in the coming period," he said.

Al-Ahli football director pointed out at the end of his remarks that there is no administrative crisis with the player Saleh Juma after leaving the accounts: "The ball at home, choices are inherent right of the technical staff, I expect a lot from him because he is still young."