Al - Ahli in the UAE .. Weiler lecture .. and strong training of the guards 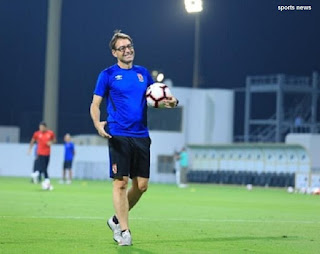 Al Ahli has launched its camp in the United Arab Emirates, taking advantage of the international downtime to further prepare and concentrate to resume the season in an ideal way.

The first training session was held at Al-Ahli Youth Club Stadium in Dubai, and witnessed a technical lecture from Swiss coach Rene Feiler.

The 25-man Al Ahli team in the UAE arrived in Dubai on Thursday to prepare for the resumption of the Premier League and face Sahel in Tunisia next November in the Champions League.

During his theoretical lecture with the players, Feiler was keen to talk about some of the technical issues he intends to apply in the upcoming games and in training, and stressed the objectives of the camp.

The current camp is the first for René Feiler outside Egypt, where he seeks to learn more about the players.