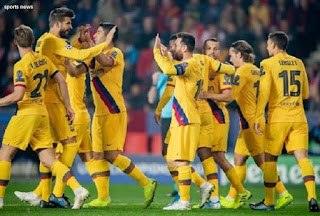 The Spanish National Committee to Combat Violence, Racism and Xenophobia in Sport has rated the match between Barcelona and Slavia Prague in the fourth round of the Champions League football "high risk".

The match will take place next Tuesday, November 5 at Camp Nou, where the two teams met in the last round in Prague and won Barcelona 1-2.

Barca need to win the match to qualify to the last 16, where they lead Group F with seven points, three points ahead of Inter Milan and Borussia Dortmund.

The Spanish Football Federation's Competition Committee decided to postpone the clasico match at Camp Nou between Barcelona and Real Madrid, which was scheduled for Saturday, on December 18, due to riots and demonstrations in the province of Catalonia, injuring dozens of citizens and more than 40 police.