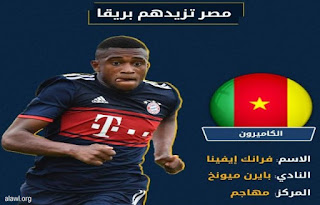 The finals of the African Under-23 Nations Cup, which will be held in Egypt with the participation of eight teams, is scheduled to qualify the first three teams to participate in the Tokyo Olympics 2020.

"Yalla Koura" presents a series on the most prominent talents that are expected to shine in the next edition, where the tournament will start on November 8 until 22 of the same month.

Frank Ivina remembered this name well, the young player representing the Cameroon team in the African Championship has been able to speed the rocket since the beginning of his career in German stadiums.

The 19-year-old has imposed himself despite his young age to offer a distinct level with the Bavarian team Bayern Munich since the start of his career in the country of machines in 2015.

Ivina came to Germany at the age of six, where he played ball in his country Cameroon until 2014, after which he moved with his mother and played in Munich through SVN München e.V.

The talent of the Cameroonian has caught the eye of the Scouts of Bayern to be a step for the player came from his country immersed to become the talk of newspapers in Germany.

In 2017, just one year after his 17th birthday, the young player was called up for first-team training, specifically with Italian coach Carlo Ancelotti.

The young Cameroonian, in his first training session with Bayern Munich, grabbed the attention after scoring two great goals, which led to the former Bayern defender Matthias Hummels and current Borussia Dortmund to comment on the player.

Hummels said the youngster is a great talent at Bayern, expressing his wish to join the first team due to his excellent scoring ability.

The young Cameroonian numbers took an ascending approach and the season (2014-2015) was the beginning of the player with the youth team in Bayern after he participated in 20 games, scoring four goals and making three assists.

The following season was a record for Cameroon's talent, contributing 34 goals in 28 youth league games, scoring 22 goals and making 12 assists.

This season Ancelotti has promised to make him the first team player, especially as he helped Al Shabab win the league title after a 10-year absence.

The former Bayern coach Ancelotti has likened the Cameroonian to the current Bayern striker and the Polish star Robert Lewandowski because of his work with the Bavarian team.

Ivena's third season continued to shine by scoring eight goals and making 10 assists, but the club's management found it better to leave the Cameroonian on loan for more chances. 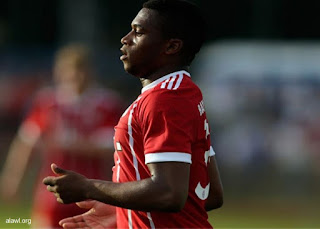 Holstein Kiel was the second side of the young Cameroonian who moved on loan, but the numbers were not good after scoring four goals and making one goal in 26 Serie B matches in Germany.

Ivina continued his journey by moving to third division club Ordingen, where Cameroon have made 14 appearances this season, scoring four goals and making three assists.

The next Cameroon star, according to the German press, made Ole Hoeness comment on the player, stressing that his team will benefit from Ivina in the future, especially after the management last year extended the contract until 2021.