Fathi: I rejected an attractive offer from Pyramids .. I did not specify material conditions on Ahli 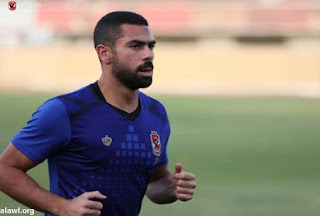 Al Ahly player Ahmed Fathi has confirmed that he rejected an attractive offer from Pyramids to sign him before the Egyptian Super match against Zamalek, pointing out that he did not specify any material conditions on the management of the club since his move to the Red Fort.

Fathi said in a television interview on "Sport": "arrived at the club a tempting offer from Pyramids in order to sign me before the Super match, and the return was great, and my salary is greater than what I received with Al Ahli."

He added: "I talked with Captain Sayed Abdul Hafeez (the director of football in Al-Ahli) about the offer of Pyramids, I have a contract with the club and whenever I need the club will continue with him, Ahli Betty and deserves sacrifice, playing for any rival team Ahli impossible."

Fathi revealed the scenes of renewing his contract with Al-Ahli last year, saying: "I notified Abdul Hafiz of my desire to continue with Al-Ahli, and never touched on material matters as it is reported, I did not specify any material conditions throughout my career with Al-Ahli."

He continued: "I just asked him to be appreciated, I am now 34 years old, and refused to Hossam Badri professional time on loan for six months despite my desire to experience, but I respected the opinion of the club and renewed my contract."

"The Saudi youth wanted to join me on a loan of $ 1.3 million. It was easy to let me leave after we won the league title at the time, but my request was rejected," said Al-Ahli's full-back.