Hossam Ashour: Interruption of the league is not in the interest of Ahli .. Everyone is afraid of Feiler 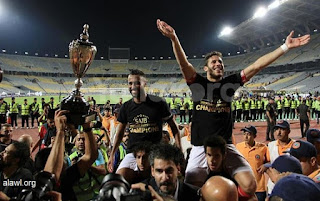 Ashour said in comments on the screen of "MBC Egypt": "We will need time to return to our level, stop the league is not in our interest."

Ashour responded to criticism of him about talking about his tournaments with the Red Fort.

He continued: "My championships with Al-Ahli reality and after an effort continued for nearly 14 years."

And on his desire to join the Egyptian team with coach Hossam Badri, replied: "Hope exists and the door of the team is open to all, but I want to talk frankly I did not join with Hassan Shehata in the glory of shine at the age of 23 years."

Ashour ended his talk about coach Rene Feiler and the results he has achieved since taking over Al Ahli, to reveal: "Everyone before Feiler took over because he did not have a resume, but every coach working in a large team wants success and this is what Feiler is doing after the distinguished start in The first six games. "

Weiler made a great start with Al Ahly, both locally and African. The Red team won the first three rounds of the league and also passed the round of 32 of the African Champions League alongside the Egyptian Super Cup at the expense of rivals Zamalek.