"Had it not been for the landing of Zamalek," .. Morteza Mansour talking about Micho and Badri and warns Khatib 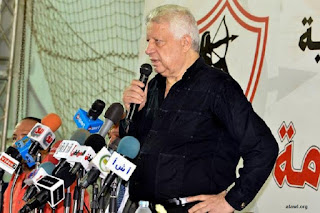 Zamalek club president Mortada Mansour has called on some members of the White Castle to stay away from the club, and let him and his council work in silence.

I say to some associates of Zamalek, let the council work for the club, we want to work only, we have the stadium file and 100 battle for Zamalek

"If I were not in Zamalek, I would have made him relegated because of the chaos."

He continued, "Meizhou arrived in Zamalek to the top of the league, achieved the title of the Egyptian Cup, qualified for the group stage of the African Champions League, continuing to the end of his contract, is still in the beginning with the team."

"If we terminated the contract with Meizhou, they would also find that we are changing coaches quickly, Meizhou is continuing to the end of his contract."

"Five players from Zamalek went to the team. I would have liked Mohamed Abdelghani to join because of his form, but we don't want to comment on the choices of Hossam El Badri and his staff."

"Of course I love and support Hossam al-Badri, he is a respectable man, I wanted him as coach of Zamalek one day," he said.

"Al-Khatib has warned the president of Al-Ahli and those with him whether Mohammed Morgan or Khalid Murtaji or Mohamed Gamal Al-Jarhi, there is a campaign to insult and insult Zamalek club and its symbols and the Council and its fans."

The president of Zamalek concluded his remarks by saying, "There is incitement on their part.