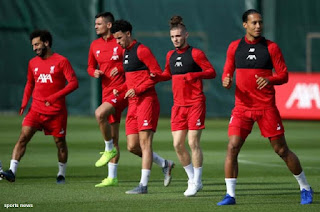 Daniel Elliott, a name that could fade a bit until it reappears after years on the fingers of one hand, as one of the names referred to as outstanding talents in the world of English football.

The 16-year-old, born in Chertsey on the banks of the River Thames, has known the way to the world record since his first appearance at Fulham, when he played in the League Cup at the age of 15 years and 174 days, to be the youngest player to play an official game in the history of the club.

On May 4, Elliott played his first official game at Premier League to be the youngest ever in the tournament's history at the age of 16 years and 30 days, after only two minutes against Wolverhampton.

But these figures were not the reason for Liverpool to sign the left-handed player who wore the Reds shirt last summer and entered the preparation season with the first team, without disclosing the financial value of the deal.

Scott Parker, who gave Eliot the chance to appear with Fulham, said: "He is a talented player on the technical level, a special talent, possesses a lot naturally, and offers what he has on the pitch with ease .. He is great in dealing with the ball, can act Perfect for a person of his age. "

Liverpool's right-footed left-footed midfielder played in the run-up to Napoli and despite the loss, coach Juergen Klopp praised Elliot. "I can say a lot of positive things about this player," he said.

Klopp pointed out that the player preferred Liverpool to other clubs, where press reports indicated that Real Madrid and Paris Saint-Germain were the most interested in the English teenager. "He signed for us and could have gone to many other places but wanted to be part of Liverpool."

"We must not forget that he is only 16 years old," said Liverpool assistant coach Pepin Lenders. "We have to deal with it carefully, but what I have seen from the beginning of his career is that he is a very educated boy with a great enthusiasm for the games."

"If you come here and you see players like Milner, Henderson, Lalana, Vinaldum, Fergie, Firmino, and all the players train without complaint or justification in the most difficult situations, they prefer the team to themselves, and you are a young man, you will not wish for a better place."

After making records at Fulham, Elliott was able to do the same for Liverpool and at the age of 16 and 174 days, he played in the League Cup to be the youngest player to start a Liverpool game against Milton Keynes Dunes, and also became the youngest player to start a match in Anfield when he played against Arsenal Yesterday, 16 years and 209 days.

Can Liverpool, through Elliot, reproduce a left-wing winger with Mohamed Salah's abilities to attack the team in the future?