Mazembe announced the readiness of the "crows' nest" security .. And Kaf decides his position on the game Zamalek 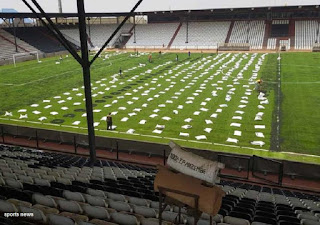 Congolese club Mazembe have announced that their stadium "Mazembe Stadium" is ready for security to receive the matches to remain approved by the CAF.

Mazembe have started repairs at home in the past, hoping to prepare them for the upcoming matches, both locally and African.

Mazembe published on its official website that a delegation of security authorities in the Congo visited the stadium and the management of the club was granted a certificate stating that the stadium is safe to receive fans, after examining the entrances and exits and proved that it complies with all security standards, according to the club announced.

The club added that they had received a certificate that the pitch - from artificial turf - was ready and intact to receive the matches.

The club announced that the team will be able to train on the new pitch on Monday, but without specifying a date for the games.

The club concluded that they were waiting for a delegation from the African Football Confederation (CAF) to inspect the stadium and give them permission to host the matches.

The Congolese club set the date of the match with Zamalek in the first round of the group stage in the African Champions League to be on 30 November.