Metwally and Nedved within the mission .. Al-Ahli accompanies 25 players for the UAE camp 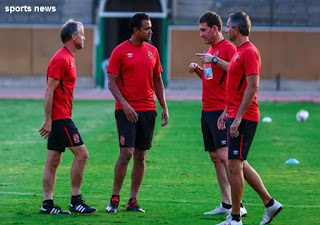 Al Ahly's first team team left Cairo at 10 am on Thursday, heading for the UAE to prepare for a week-long camp during the league break.

The team is scheduled to play its first training this evening in Dubai, UAE.

The Swiss coach Rene Feiler, the coach of the team, to make the most of the outside camp, which focuses on the technical and moral side.

On the other hand, the decision of the technical staff to take Karim Walid "Nedved" and Mahmoud Metwalli to the UAE, the duo complete their qualifying program during the team camp, where Metwally participates in the physical part with the players to identify his condition before being fully paid in the group exercise, while Nedved completes his program He has recovered from a knee injury and is close to returning to group training.

It is worth mentioning that Al-Ahli camp comes in light of the cessation of the league competition; because the first team is linked to the matches of Kenya and the Comoros in the African qualifiers (Cameroon 2021), and the Olympic team is linked to the African Nations U-23 Championship hosted by Egypt during the period from 8 to 22 November and qualifying for the Olympics. Tokyo 2020.