Modric: Ramos goal in 2014 final changed the history of football in Europe 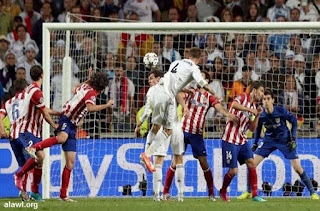 Real Madrid midfielder Luka Modric has confirmed that Sergio Ramos's goal in the 2014 Champions League final, which gave the club the kiss of life and led them to beat Atletico Madrid in extra time and then win the title, perhaps It has made a difference in the history of football in Europe.

"Maybe that goal has changed the history of football in Europe a bit," Modric said in an interview published by Spanish media on Wednesday. "Before that, Real won a lot, that's for sure. .

The Spaniard pointed out that the goal of his Spanish teammate toppled a major psychological obstacle inside Real Madrid after the latter fell three consecutive in the semi-finals of the European Championship under the leadership of Portuguese coach Jose Mourinho.

He continued: "Sergio's goal to overcome this mental barrier, it was a historical goal other than everything, perhaps without that goal would not have achieved all those achievements, which followed successively later."

Modric said he liked to play football without paying attention to the hustle and bustle around the game.``I prefer football only.