Mortada: I am not sad from the reconciliation of Khatib with the Sheikh .. Zamalek "Mesh Shahat" 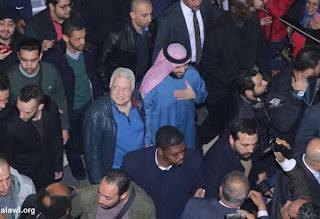 Zamalek president Mortada Mansour asked not to involve him in the reconciliation of Mahmoud Al-Khatib, president of Al-Ahly, with Turki Al-Sheikh, head of the General Authority for Entertainment in Saudi Arabia, stressing that Zamalek is not begging.

Murtada said in statements to the program "Zamalek today": "It is normal to reassure the Al-Sheikh on the health of Khatib because he is a respectable man and a kind of magnanimity because it is authentic Arab, and it was natural to thank him too."

He added: "Keep me away from the relationship of Mahmoud Al-Khatib and Turki Al-Sheikh.

He continued: "There is no problem between me and Turki Al-Sheikh so I mean to those posts written on Facebook, did not impose or ask him to support Zamalek or sought to do so, he thanked the club in light of the strength of his relationship with Al-Ahli."

He explained: "Zamalek is not Shehata or beggar, it is a respected club, and if I can not defend him I will leave."

He concluded: "My visit to Mahmoud al-Khatib in his home rumor did not ask me the Minister of Sports that, just wish him recovery and there is no disagreement, I disagree with him only because he is unable to stop the attacks and insults that I am exposed daily through my phone."

Turki Al-Sheikh announced the end and liquidation of all disputes with the Board of Directors of Al-Ahli Club, announcing his return to the arms of the Red Fort with his readiness to do anything for the club that encourages him as he put it.

It is noteworthy that Mahmoud Al-Khatib thanked the official website of Al-Ahli to Turki Al-Sheikh after the former honorary president of the club sent a delegation by the head of the Saudi Entertainment Authority to the home of the President of the Red Fort to check on his health.