"Mo okay but" .. Liverpool reveals the position of Salah to participate against Arsenal in the Cup 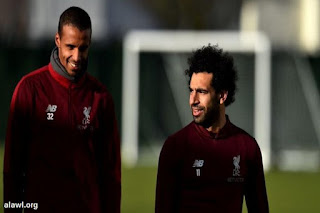 During comments quoted by Liverpool newspaper Eco said the club's assistant: "Salah's condition is good, his discharge in front of Tottenham was fear of worsening injury."

Concerning the condition of Shakiri and Joel Matip, the club's assistant said: "Shakiri will not return to the team until after the end of the next international suspension.

"We want to give Shakiri enough time to recover. The calf injury is serious."

He continued: "Matip still suffering from knee pain, and needs some time to recover, and I do not know exactly when he returns."

"All the players are in good shape but Salah, Shakiri and Matip will not play against Arsenal."

Salah came out in the final minutes of Liverpool's match against Tottenham in the tenth round after complaining about the ankle pain that he had suffered during the game of Leicester City in the Premier League.

Liverpool will host Arsenal on Wednesday evening at the Anfield Stadium in the Round of 16 of the League Cup.