Pique: We offered to cut our salaries to sign Neymar 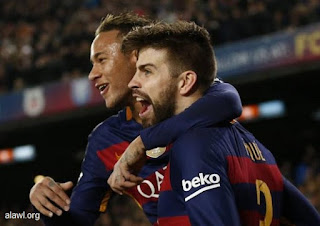 Barcelona defender Gerard Pique has confirmed that the Catalan players have offered to cut their salaries in order to sign former team mate Neymar da Silva of Paris Saint-Germain, during the last summer transfer market.

Neymar has said he wants to return to Barcelona last summer, but the club's huge material demands have halted the deal.

"In football everything can happen. We have already told him when he went to Paris Saint-Germain that he would go to a golden prison," Pique told Spanish radio Cadena Ser. ".

The Spanish defender added: "President Bartumio told us that we agree to reduce our contracts, in order to control fair play."

"So we postpone salaries, and we are paid in the second or third year so Neymar can come back. We were looking for a suitable solution," said Pique.

Neymar moved to Paris Saint-Germain in 2017 as the most expensive deal in football history with 222 million euros.