Report "will kill players" .. Guardiola warns of pressure of the games and Club threat 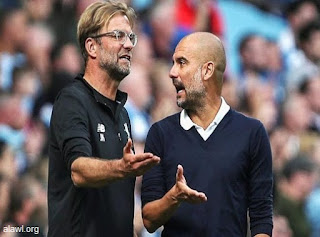 Liverpool manager Juergen Klopp has complained about his team's schedule after the quarter-finals of the Carabao Cup against the Club World Cup.

The Carabao Cup quarter-finals will be held on December 16, as Liverpool travel to Qatar for the Club World Cup, which begins on the 18th of the same month.

Klopp asked the English Premier League team to consider the Reds' participation in the Club World Cup: "We hope they will now start to find a solution. I think it is fair. This problem is clear now. We will not be the victims of that problem."

Klopp threatened that if there was no suitable date for the match in conjunction with the two tournaments, he would withdraw from the Carabao Cup: If it doesn't, we won't be able to play. "

Klopp was not the only one to complain about the team's schedule, preceded by Spanish manager Pep Guardiola before the start of the season because of the delayed return of players from their holidays.

Guardiola had objected to the cohesion of the schedule before the start of the Premier League, and the players did not catch up to take a break because of the cohesion of tournaments, saying: "This is a crazy schedule, and we will kill our players sooner or later, we can not continue this for a long time."

Manchester City manager warned the Premier League that players should take enough breaks to give tournaments more quality: "Players must breathe and rest, to give more quality to tournaments, players must get rest, I don't want them back if they are unfit or stressed Or not yet recovered from a difficult season. "