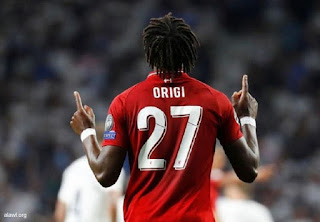 Origi's fourth goal led Liverpool to the Champions League final and scored the second goal against Tottenham to win the Reds for the sixth time in their history.

Since that match, the Belgian has become a social media icon and a savior for the English team .. But how was that transformation in the life of Origi?

The Belgian striker was locked in a substitute for Liverpool coach Juergen Klopp, prompting speculation about his future, and there was growing assurance about his departure during the first transfer period.

Origi started his career with the Belgian youth side Genk before moving to Lille, who progressed in his age groups until he was promoted to the first team at the beginning of the 2013/2014 season.

At the start of the 2014/15 season, the 24-year-old moved to Liverpool and returned to Lille on loan for one season, followed by another loan to Wolfsburg at the start of 2017/2018.

Origi's debut with Klopp was not perfect.At the start of the 2018/19 season, during the first 13 rounds of the English Premier League, the Belgian did not play a single match and was merely on the bench at Huddersfield and Arsenal.

6 minutes was enough to make Origi's life a substitute looking to leave for a "savior" for the team, in the Liverpool match against Everton in the 14th round of Premier League held breath at Anfield where the meeting was heading towards a goalless draw which means that the Reds will lose two precious points during the competition With Manchester City, however, Origi had another opinion and scored the winning goal to give him a great opportunity to take full advantage of it.

Klopp rewarded his player with the opportunity to play in the next match against Burnley in the 15th round, and made a goal during his team's 3-1 victory.

Origi did not break into the starting line-up for Liverpool, but was always on time and in time. 73 Mohamed Salah is injured and leaves the stadium to push Club "savior", who took advantage of the opportunity again and proved to his coach that he deserves that confidence and already scored the winning goal for the Reds.

In the second leg of the Champions League semi-final, the Reds were down three times in the first leg, missing Mohamed Salah and Roberto Firmino in injury. The Reds will be able to qualify for the final before writing the final word in the team's journey against Tottenham.

After the end of Liverpool's dramatic season, Klopp dismissed the loss of Origi and became one of Klopp's trump cards on Liverpool's bench.

The Belgian magician led his team's attack in the League Cup last 16 against Arsenal, and managed to score the fourth and fifth goals in the match that ended in a 5-5 draw before the referee for the penalty shootout, which gave the Reds to the quarter-finals.