Report .. Why Klopp threatened to withdraw from the Carabao Cup? 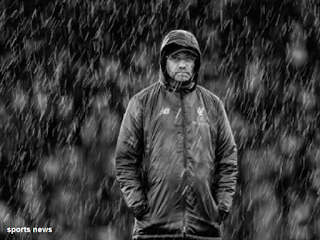 "If they can't find the right time, I will not play that game," Liverpool manager Juergen Klopp has threatened to quit the Carabao Cup if no other date is set.

Liverpool qualified for the quarter-finals at the expense of Arsenal on penalties, and was drawn by the draw against Aston Villa in the game scheduled for December 16 next.

The English team seems to be facing a critical winter period as the Reds compete for the Club World Cup in Qatar, as well as league, FA Cup and League matches, and Klopp is forced to threaten to withdraw from the Carabao Cup if the circumstances of the team are not met.

The club are seeking to win the English Premier League, which has been absent for 30 years, with the Reds at the top of the league table after 10 rounds with 28 points, a full six points behind second-placed Manchester City and holders of the past two seasons.

Klopp and his team-mates are also hoping to achieve a world-class achievement by qualifying for the final of the Club World Cup in Qatar, where they won the Champions League last edition, which qualified them to participate in the World Cup of the clubs, as well as winning the European Super Cup after beating Chelsea on penalties.

Competition will not be easy, especially with the pressure of the big games that will be played by the English team during the month of December, according to the Premier League schedule, the Reds will play 9 games in 25 days divided as follows: 5 games for Premier League (after postponing its game against West Ham United), Champions League match, along with two matches in the Club World Cup.

Klopp will have to play a game every two or three days, and in mid-December he will have to play two games in 72 hours (Watford Premier League, Aston Villa in the Carabao Cup) a few hours before another match in the Club World Cup semi-final, which complicates matters further.

The following is the schedule of Liverpool's games in December:
December 4
Liverpool vs Everton - 15th round of the league

December 7
Bournemouth vs Liverpool - Round of 16

December 14
Liverpool vs Watford - Round 17

** December 16
Aston Villa vs Liverpool - Quarterfinals of the Carabao Cup

December 18
The winner of the Mexican match Monterrey and (Al Sadd vs France Hengen Sport) will face Liverpool in the Club World Cup semi-finals.

December 21
The West Ham game against Liverpool has been postponed because of the Reds' involvement in the final or third place for the Club World Cup.

December 26
Leicester City vs Liverpool - Round 19 of the league

December 29
Liverpool vs Wolverhampton - Round 20 of the league