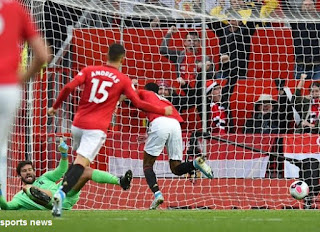 Manchester United manager Ole Gunnar Solshire has compared striker Marcus Rashford's free-kick against Chelsea to lead his side to the quarter-finals of the English League Cup with that of Juventus star Cristiano Ronaldo.

"His goal was very similar to that of Cristiano," Solshire said of Rashford's 30-meter goal.

Rashford's goal contributed to a 2-1 win over the "Blues" where he had also scored the first goal, to move Manchester to the quarter-finals to face Colchester United, section IV.

"He has nerves of steel. He had to hit the free kick like a penalty and he had no problem, it was a great way to win the game, it's amazing," he said.

United defender Viktor Lindolph also posted on the networks a portrait of the Portuguese star and another of Rashford in a similar position for the free-kick.

During his time at United, Aldun hit unforgettable free-kick goals, such as his goal against Portsmouth in 2008.