Table tennis .. Here quality qualifies for the golden box of the World Championships for the Confederations of Under 15 years 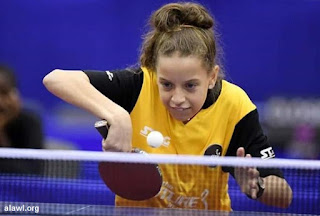 Egyptian and African champions Jouda have qualified for the semi-finals of the U-15 table tennis tournament in Poland, after beating India in the quarter-finals.

Egypt's Jouda defeated 15-year-old Indian Gurbadi Deepak in the quarter-finals of the tournament with a 4-1 lead.

Ahead of the quarter-finals, Jouda defeated Poland and Victoria Ruble in the 16th round of the tournament with a 4-1 lead.

The quality of the youngest players in the Golden Square is only 12, while their semi-finalists are between 14 and 15 years old.

In the semi-finals of the Confederations Cup here, Judeh will meet 15-year-old Japanese Akai Kaho.

If she qualifies here for the final, she will meet the winner of the second semi-final between Romania's Elena Zaria and South Korea's Lee Yun.

In the event of a loss, you will play with the loser from the semi-finals for third place at the U-15 Intercontinental Championship.