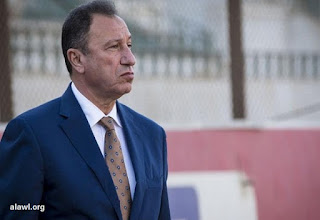 Al-Ahli Club announced the submission of two formal complaints to the Chairman of the Supreme Council for Media Regulation, the Head of the Sports Media Performance Control Committee against Al-Hadath Al-Youm and Khalid Al-Ghandour, presenter of Zamalek Al-Youm.

Al-Ahli said in the early hours of Wednesday morning that this comes because they violate customs and charters and controls the media work and turn the channel into a platform for the reasons by Mortada Mansour, president of Zamalek.

Murtaza had announced 24 hours ago that he wanted to open a new page with Mahmoud Al-Khatib, president of Al-Ahli, stressing that there is no problem with him (see details).

Ahli's statement through its official website is as follows:
Al-Ahli Club today presented two formal complaints to the President of the Supreme Council for Media Regulation, the Head of the Sports Media Control Committee against Al-Hadath Al-Youm and Khalid Al-Ghandour, the presenter of Zamalek Today program, for violating customs, charters and controls of media work. Recently came out through his television interventions to draw a flood of shameful and shameful phrases to the officials at Al-Ahli Club, where his phrases carried a lot of insults and insults in a manner that incites sedition among the masses and carry the shameful and shameful phrases of the neighborhood E including not consistent with the spirit of sportsmanship among all clubs.

Al-Ahly stuck in its complaints to emphasize the seriousness of what is committed by the president of Zamalek against Al-Ahli club and its board and fans on the relationship between the masses of popular clubs.

In his complaint, Al-Ahli stressed that the excesses of the president of Zamalek club exceeded the borders and that the escalation of the matter today is not a new thing. In cooperation with state institutions and in the interest of the higher interest of the country.

The club added in its complaint that it is waiting to take the two parties entrusted with examining his complaints with what they deem appropriate law to stop these crimes and media violations extraneous to the Egyptian sports and media circles, which were committed through the program Zamalek today broadcast on the channel today, calling on the concerned authorities to carry out their responsibilities and address these abuses by law And not stand immunity parliamentary immunity out of public morals and scratch modesty.