Valverde: Messi is doing things that are impossible for others to do 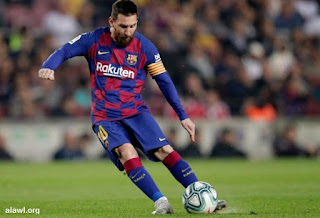 Barcelona coach Ernesto Valverde has said that it is impossible for anyone to do what Lionel Messi is doing after he led the Catalans to a 5-1 victory over Valladolid in the Spanish league. Yesterday Tuesday.

"It is not easy to win in La Liga," Valverde said. "But watching Messi play seems to you that everything is easy and the whole world can do what he (Messi) does, and that's impossible."

Messi led Barcelona to victory over Valladolid in the tenth week of La Liga, and the game saw a remarkable brilliance, after scoring two goals and making two more goals.

Valverde pointed out that every time Messi acquires the ball he expects something to happen. "Something good for us and bad for them. He has that talent that no one has. He passes from any player. To do an individual movement, but because he sees what no one sees, sometimes this happens to me in training, where he sees is a pass you can not see from the outside. "

Valverde is delighted that Messi has recovered and returned to his physical readiness and technical development every day after the recent injury, and continued: "It is good for us to restore his readiness after a long period of stop and be able to score goals."

Valverde pointed out that Barcelona is looking forward to winning the league again after Messi recovered and returned to play games, and continued: "We carry La Liga in our memory, what we want now is to look forward and win this copy, which will be as complicated as with all versions, Valladolid Tied with Real Madrid and Atletico Madrid, winning on any pitch is a difficult thing. "