Zamalek: The policy of contracts will differ with Meizhou .. We may turn to the return of the loaned 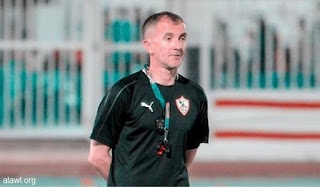 Zamalek club general manager Morteza Mansour has revealed that the contract policy will vary since Serbian Meicho took over as white coach.

He added in a statement on the program "Evening of Lights" and broadcast on the screen "Cairo and the people": "Since the takeover of Micho and agreed with him that we will resort to the young people next season."

He continued: "The goal of relying on young people in order not to resort to contracts continuously."

The son of Zamalek president during his statements, that the team suffers from some shortcomings, pointing out that the club does not have more than a deal in January because of the right of the White Club in the registration of one player on the African list.

"We did not talk about the signings in the winter transfer market during the current period. The season started recently, but we do not have the opportunity to sign more than one player because of the list," he said.

He pointed out: "We will register Mohamed Onagem in the African list and that there will be one seat to close the list."

The supervisor of the football team in Zamalek that the management of his club may be moving to return some loaners, especially since there are clauses in their contracts allows the club to return them.

"We are thinking of returning Maarouf Youssef from the Arab contractors, especially as we suffer in the middle of the center, but what is hindering his return is that there is no place for an African player on the list."