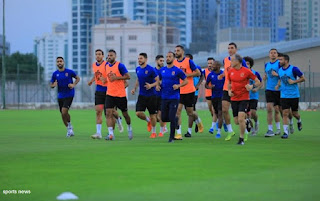 Al Ahli performed its training on Friday evening at Al Ahli Youth Stadium in Dubai and witnessed the presence of many Al Ahmar fans in the UAE.

Al Ahli continued its training on the second day of the team camp in the UAE, and included training on the physical side and my plans, in preparation for the post-stop phase, which witnesses the team's participation in the league and group stage in the African Champions League.

Ahli coach Rene Feiler held more than one lengthy session with the players before the training.

Feiler talked with the players about some technical points that he wants to implement during the training, and explained the method of playing the tactical team that he implemented during the section on training ball.

The coach also made sure to stop the training more than once to correct errors, and ask the players to implement some technical instructions.

Sharif Ikrami, Mohamed El Shennawy and Ali Lutfi, the three goalkeepers, drew strong training during the team's training and participated in the training part of the ball, which the technical staff focused heavily during the second day of the camp.

Weiler divided the length of the stadium to implement some of the tactical aspects of action and building attacks, and in the latter part of the training divided the players into three teams, amid great enthusiasm for all players.

Al-Ahly player Mahmoud Waheed participated in the group training held this evening at the sub-stadium at Al-Ahli Youth Stadium Dubai.

Hussein complained of a knee bruise while participating in the exercise and went out before the end and put snow on the foot to get rid of the effects of the bruise.