Cannavaro and Libby under siege .. Why suffer the legends of Italy in China? 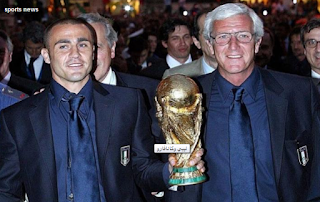 Tough times for veteran Italian coach Marcello Lippi, after a media attack suffered recently, because of his lack of interest in his position enough, despite receiving a huge salary.

Lippi will not lead the Chinese team in the East Asian Championship, which starts in December, because of his presence in Italian territory at the time, and his national assistant Li Tai will lead the country during that tournament, which sparked media outrage towards the famous Italian coach.

The newspaper "Toto Sport" Italian reactions of some Chinese media, which considered that Libby continues to ignore his duties towards the team, despite receiving a salary of 180 million yuan, which is equivalent to 25 million dollars annually.

Some major Chinese newspapers wondered whether it was self-evident that Libby could serve as coach of the national team, or for long periods in Italian territory, far from Chinese football.

Adding to the anger of the Chinese media is the reason for the absence of Libby from the leadership of his team in the East Asian Championship, where Libby will spend the second half of December in his country, to celebrate Christmas holidays there.

The news that provoked the Chinese was followed by a poor start to the 2022 World Cup qualifiers, where they are second in their group behind China, after a frustrating 0-0 draw with their Filipino counterpart.

The Chinese team has won only 16 wins in 36 games under the leadership of Lippi, and is currently 69th in the rankings of the International Federation of Football.

Lippi's crisis coincides with the difficult situation of his compatriot Fabio Cannavaro, who starred under his leadership at the 2006 World Cup in German territory, where he came close to leaving the leadership of Guangzhou Evergrande Chinese team, after a series of falling results locally and continental.

Guangzhou were sent off in the AFC Champions League semi-finals after losing to Japan's Urawa Reds with a clean three-point return in total, while losing 8 points in their last four clashes in the Chinese league.

Gwangju drew 2-2 at home with Henan Jian in the 27th round of the competition, narrowing the gap between them and Shanghai runners-up to a single point just three rounds.

Chinese reports pointed out that Cannavaro appeared unprecedented angry in the dressing room after the confrontation, and caused his anger to destroy some of the contents of the room, before the club issued a shocking statement during which he held a series of sessions with the young coach.

The Chinese club's statement described the sessions as "definitive" to remind the Italian coach of the goals of the club and its culture, to realize what is required of him in the coming period, and it was decided that the national coach Zeng Zi will lead the team during the period of Cannavro those sessions.