In numbers, Wilfred Nedidi is the best African in Premiere League for 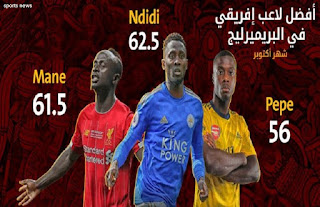 The third month of the Premier League is a tough competition between clubs to win matches, or between players in the scoring struggle, but the African competition has been no less powerful.

The African conflict between the African players was most intense during three games played in October, some of whom succeeded in the registration and industry, as well as who managed to help keep his team clean sheet.

The assessment of the best African player in the English Premier League to be held monthly until the end of the tournament depends on several factors, depending on the position of the player, the defender is not required to make or score goals as a priority, but his success in one of them gives him more points than given to the striker in the same cases.

The striker or midfielder is also not required to perform defensive tasks such as clearing the balls or blocking them on the way to the net, giving him an advantage in scoring defenders in the same cases.

There are some situations that also result in the omission of points from players in the assessment, such as getting colored cards, either yellow or red, or causing a penalty against his team, wasting a penalty in favor of his team and scoring an own goal.

However, the striking brilliance of the player by scoring a number of goals, or scoring with the industry during a single game, as well as his defensive appearance and prevent several goals from reaching the goal of the team may give him extraordinary points.

According to the October valuation, Nigerian Wilfred Nedidi outperformed all African players in other clubs, scoring 62.5 points against Liverpool's Senio Sadio Mani, who scored 61.5 points, and Ivory Coast's Nicolas Bibi with 56 points. 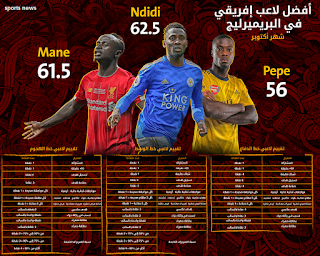 Nedidi did not visit his opponents' net this month or set up a goal for his team-mates during his three games against Liverpool, Burnley and Southampton, but he excelled in the bilateral confrontations and the pass rate in addition to his defensive level.

Mani collected 61.5 points this month after scoring a goal and making an equalizer against Leicester City in the eighth round, while Pepe came third after rising in October and making a goal in the game Bournemouth. 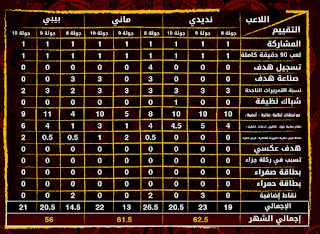