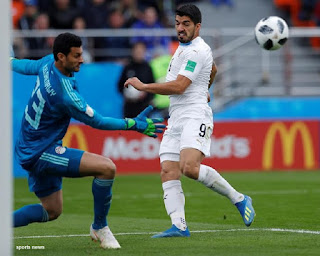 Al-Ahly goalkeeper Mohamed El-Shenawi talked about his participation in the 2018 World Cup in Russia with Egypt.

`` I played a lot of games while I was injured.I played Portugal's friendly in March 2018 and I have a muscle strain, '' El-Shenawi said while hosting the On Stadium program on On Sport.

"Cavani and the Uruguayan duo Suarez came to me after the World Cup and shook my hand and told me I played a good game and we didn't talk any more.

He continued: "There is no truth to the reported existence of Tsip in the camp in Chechnya during the World Cup, and shock the three goals against Russia in a short time behind the loss of the meeting."

Abizaid and: "I was saddened not to play against Saudi Arabia, but the participation of Essam Al-Hadari was a tribute to him, and if he became my coach there is no problem because I am a player and a coach."

He talked about the injury of Zamalek goalkeeper Mahmoud Jansh while participating in the team training, saying: "He is my friend since the youth team, and his injury occurred while jumping in training, and fell on the pitch and screamed and came to him Ajiri, who loved him very much, and saddened to download the coach Ahmed Naji, responsibility ".

He continued: "We achieved positive results with Aguirre, and our exit from the African Championship was a shock, and what was lacking the camp of Egypt in the Nations Cup is that we were not one hand."

On the crisis of Amr Warda during the last African Cup of Nations: "We thought about this difficult subject, and it is possible that any player in the same situation."

"We showed that we didn't want Warda to leave the team. We all met as players and we all refused to leave, and we authorized the big players to talk to the management, but we didn't threaten anything about it."