On her 122nd birthday, unforgettable features made the old lady's history 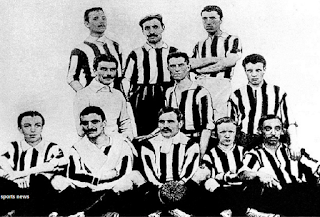 On November 1, 1897, the brothers Eugenio and Enrique Canfari led a group of students of the Massimo D'Azelio High School in Turin to establish a club that became the most famous football brand in Italian territory, which extended to dominate the Calcio 122 years later.

Juventus, the name that has gained an incomparable glamor in Italy, was founded under the name of Juventus Sports Club, before changing its name two years later to Juventus football club, began to participate in the Italian salt competition in 1900 did not appear in the usual colors "black and white" in the early years He was crowned the first league title in 1905 with pink shirts and black trousers before turning black and white in the following years, influenced by the English club Notts County, which was founded 35 years before the establishment of Juventus, and currently ranks 23rd among the twenty-four teams competing in the league. pastor The fourth English.

The most prominent step in the history of Juventus, which played the biggest role in his local domination historically, was the acquisition of Eduardo Agnelli owner of the famous "Fiat" car club in 1923, and the construction of the club's stadium was the first step of economic ecstasy, before that euphoria to crown the second title in the league Juventus was crowned with five consecutive league titles, and was the most prominent contributor to the Italian team's glamor globally, crowned by the 1934 and 1938 World Cup titles led by Ng. M most prominent Raimundo Orsi, Luigi Bertolini, Louise Monti and Giovanni Ferrari.

Juventus have many titles historically known, including zebras for the colors of the team shirt, Bianconeri "which also refers to the colors of the shirt," but the title of the old lady is now months and more widespread.

The title "Old Lady" originated from a joke among the fans, where the word "Juventus" refers to young people in the Latin language, which prompted some to use the opposite of the word to refer to the club's history and history, as contributed to the preference of the management team for elements of experience in the thirties Instead of replacing blood and using youth.

Other reasons have contributed to the title of the "old lady" Juventus, including the enjoyment of a wide cross-section of fans who came from southern Italy to work in the companies of the north, and became Juventus is accepted and their replacement for dream girls and friends.

Juventus woke up again and won four league titles between 1950 and 1960, before two new titles in the 1960s, but a new era was awaited under the manager's leadership. Diovanni Trapattoni, who took over the team in 1976.

Before that date, Juventus did not know the taste of continental titles, although locally distinguished, before rebelling on the salt in the legendary decimal led by Trapattoni, began to crown the UEFA Cup in the 1976/1977 season and then crowned the European Cup Winners' Cup in 1983/84 and the European Super 1984 accepted the most prominent scene of the European Cup Winners' Cup in the 1984/85 season, but the first crown of the most important European title was accompanied by the most painful scenes in the history of the old lady, with the departure of 39 supporters at the Hayesel Stadium, which embraced the final confrontation won by Juventus 1-0 Liverpool , After a large number of fans of the English team towards the places of their Italian counterparts.