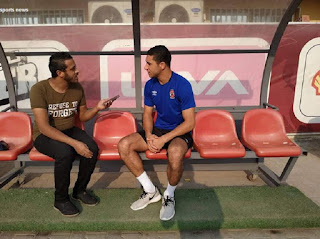 After a long absence and many injuries, Rami Rabia returned to Al Ahli this season and appeared well to join the ranks of the Egyptian national team.

The coach of Egypt's first coach Hossam Badri has decided to include Rami Rabia in the list of Egypt for the matches of Kenya and Comoros in preparation for the African Nations Cup 2021 qualifiers.

Rabia has featured prominently in the last three clashes in Red Shirt, under the leadership of coach Rene Feiler.

Championships keen to talk with Rami Rabia, who talked about joining Egypt and his ambitions with Al-Ahly in the new season.

? Do you think of the performance of Ahli this season

The team this season is going well and we have won all the games we have played, and I hope to continue on the same level and get the Champions League.

? What about René Feiler

Weiler is a good coach and a great level and knows how to deal with all the players, because of the approaching age of us, and this is a good thing in addition to the way he spoke to us.

? Do you think that Lasarte was wronged during his time as captain

Lassarti is one of the coaches who took over Al Ahli and they were at the highest level, but the failures that occurred during his tenure caused people to take him for a bad idea.

An important point is the situation of the players, always make the difference with the coach, and when a player is in good condition and can carry out the words of the coach well, it affects the team and the coach in the affirmative or negative in front of the fans.

? What are your ambitions for the current season

I hope this season we will do something good with the group of players present, and the most important thing is the African Championship because of its absence from the club for long periods, and, God willing, we can win this season and make up for the loss of the title in two consecutive finals.

? What player do you miss on the pitch now after retiring from football

There are a large number of players, including Mohamed Abu Trika, Mohamed Barakat, Emad Meteb, and many other names when they retired. I felt that football from others did not taste, and I wish them all the best in the coming periods.

What do you think of the attack on Feiler immediately after the announcement of taking over Ahli?
The attack that happened I can not talk about, because it is between the coach and the media, and I as a player I do not care what is said to the coach only when dealing with him and the work he offers.

? Do you think that your injury has been too much

I always believe in something, which is that no matter how injured, I try to return better than I, and injuries are a measure of God, especially since there is a medical device that follows my case and Khaled Mahmoud team doctor with me from the junior sector and knows how to deal with me, and this makes me come back faster.

? What do you think of the strengthening of the board of directors in the defense line

The management supported the team through the inclusion of Yasser Ibrahim and Mahmoud Metwally, and soon the crowd will be confused, who will participate in the heart of defense, and things are now organized within the team after the recovery of Metwally and Saad Samir from injury.

? Tell me about joining Egypt

I am very happy with my choice and I thank Hossam Al-Badri and Said for his confidence in, and I hope that Egyptian football will return to the African arena strongly.