Reports: Messi is betrayed by Barcelona president because of Griezmann and Neymar 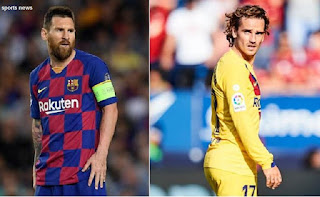 Lionel Messi is angry at Bartomio about signing Antoine Griezmann from Atletico Madrid and not restoring Neymar da Silva from Paris St Germain during the summer transfer window.

The program added that Messi was betrayed by Bartomio for not recovering Neymar and Griezmann.

Lionel Messi has said recently that he had proposed to the Barcelona administration the return of Neymar, but some people were against the signing of Paris Saint-Germain.

Barcelona have made several offers to Paris St Germain but the French club has required 300 million euros to sell it, and the two clubs failed to reach an agreement.