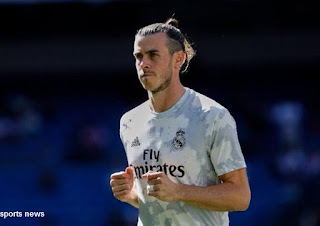 Real Madrid coach Zinedine Zidane was uncomfortable with reporters' questions about his player Gareth Bale, and called on the club to allow the Welsh winger to speak to the media to dispel doubts about his status.

Asked about his meeting with Bill after returning from his trip to London, Zidane said: "He is here, on the pitch again and recovering little by little. We are with him so that he can return to the team and that's it."

The Frenchman was again asked about Bale but preferred not to go into details about the player's status or whether he wanted to leave Real Madrid and demanded that the Welsh wing respond to reporters' questions.

Asked if he should persuade Bill to stay in the white castle, Zidane said: "He's here and I don't have to do anything." Not available yet. "

"He should go out to talk to you and tell you what he thinks, but I see him in good shape."

Zidane made the remarks at a news conference on the eve of Saturday's clash with Real Betis in the 12th round of the Spanish league.